Posted on 25th October 2021 at 15:55
Little Greene has recently launched a brand new wallpaper range: National Trust Papers II. It's a timeless collection, inspired by designs from several historic houses under the care of the National Trust. Each wallpaper in this range has been carefully redrawn, recoloured and produced, with a respectful nod to the techniques and materials used to create the original designs. There are seven beautiful wallpapers with 42 colourways in total. Design elements are based on Georgian and Victorian block-printed papers, plus decorative objects, such as a 15th-century tapestry and an 18th-century leather wallcovering.
Take a look at some examples from the collection, and discover the stories behind their creation, below...

First up, on the left below, is 'Tulip – Blue Black'. This wallpaper design is taken from Erddig, a fine country house in North Wales. The house itself has a fascinating history. It was in the possession of the Yorke family for seven generations, during which time, it saw a few periods of development and decline. Erddig was entrusted to the National Trust in 1973, where it was then restored to its former glory. 'Tulip' (which is available in seven colourways) has been inspired by early 20th-century wallpaper samples found in a tea-chest in the attic rooms.
Below right, is 'Beech Nut – Cordoba'. It's based on a late Georgian design, discovered at Oxburgh Hall, a spectacular property in Norfolk, built during the Wars of the Roses. It features a striking leaf and nut element and is available in six different colourways including the one shown here. 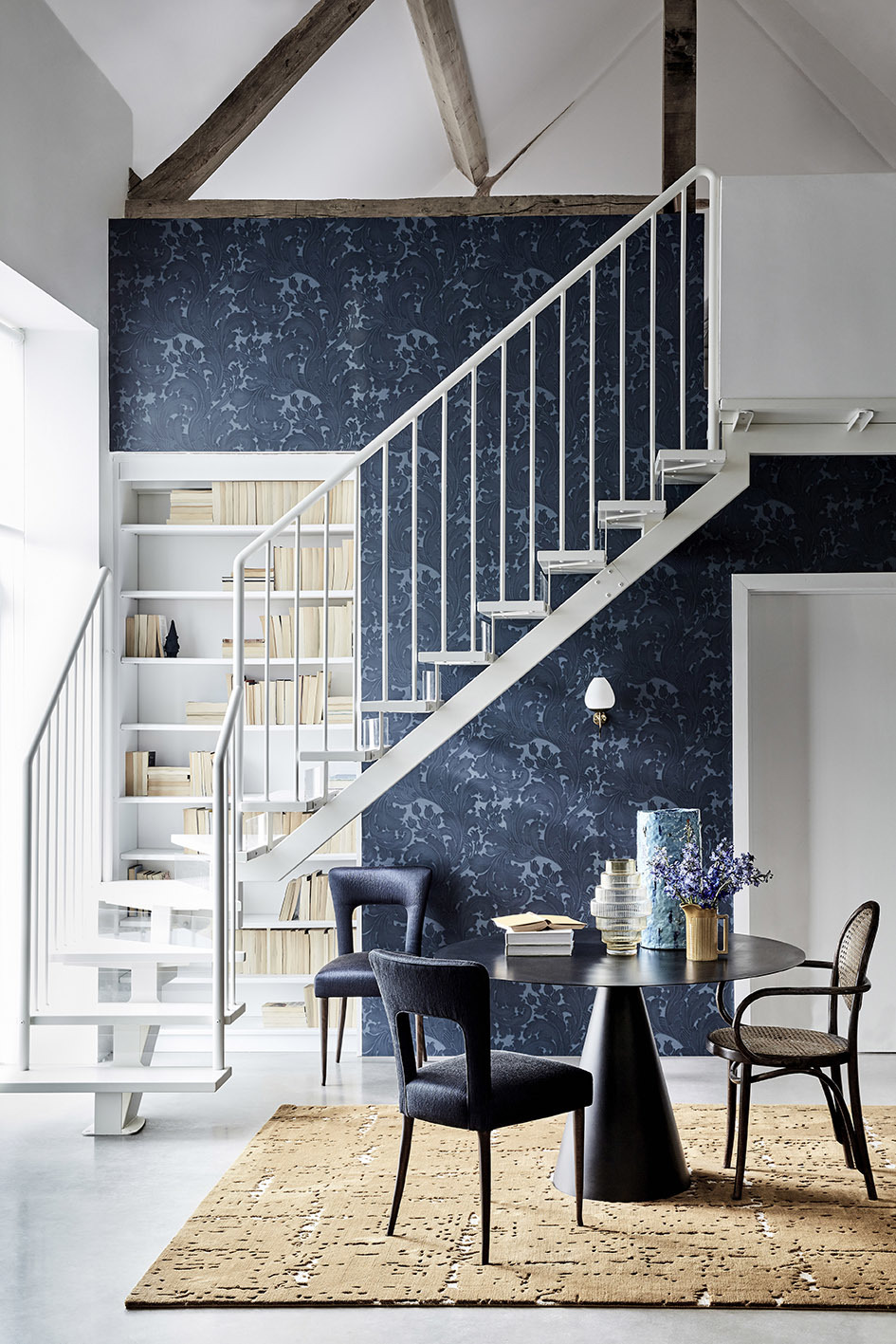 *Little Greene National Trust Papers II: 'Beech Nut – Cordoba'
'Massingberd Blossom', below left, has a definitive oriental design, with its trailing blossom and repeating birds. The original piece was found at Gunby Hall, a large country manor in Lincolnshire, built around 200 years ago for William Massingberd, a member of parliament. It's seen here in 'Mineral' with six more colourways available.
'Burges Snail' is on the right hand side below – a quirky and charming wallpaper that echoes a sense of fun and eccentricity. The pattern is derived from a bathroom at Knightshayes in Devon, which was designed by the British architect, William Burges, famous for his Gothic Revival style. Burges Snail has seven colourways – 'Juniper' is shown below. 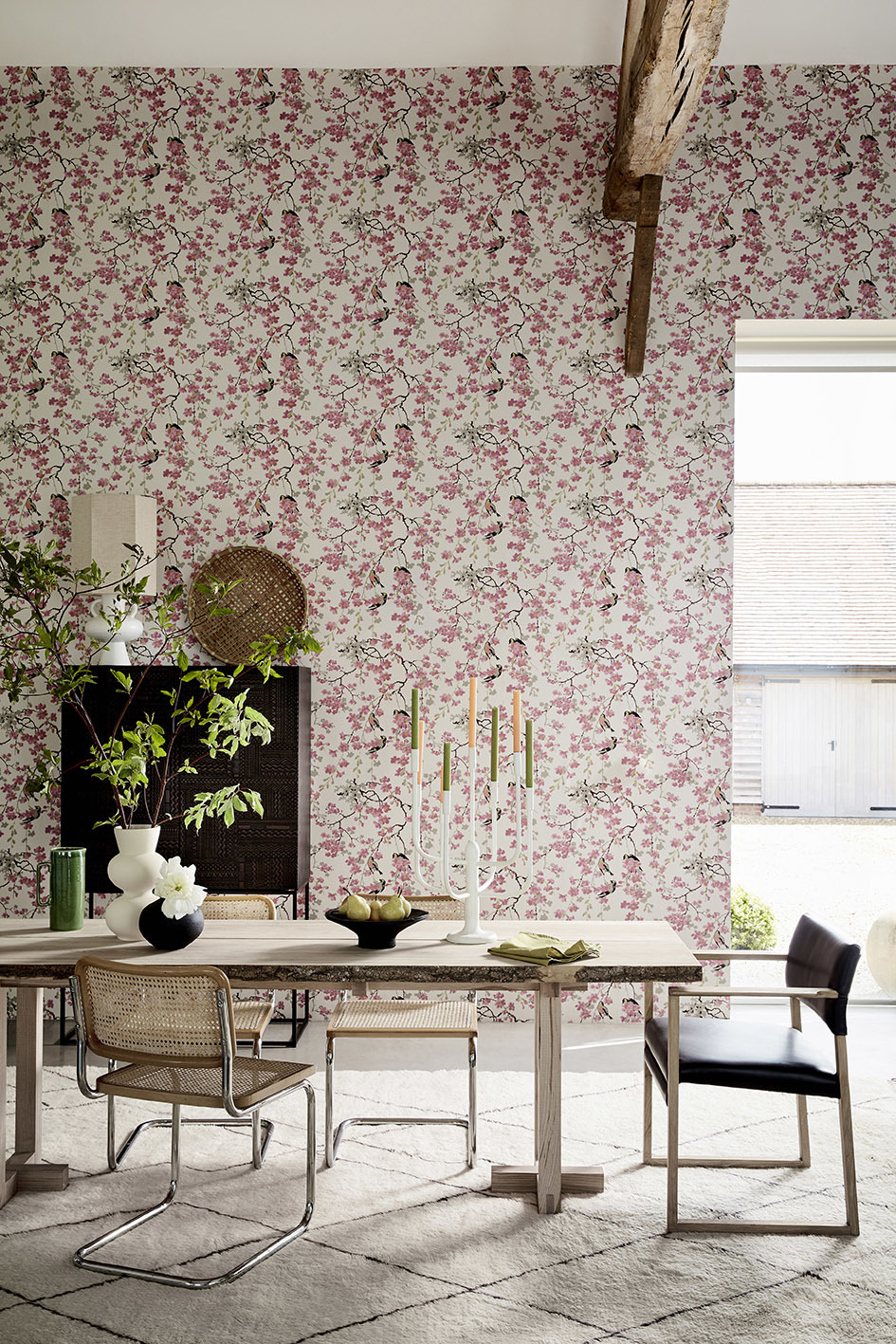 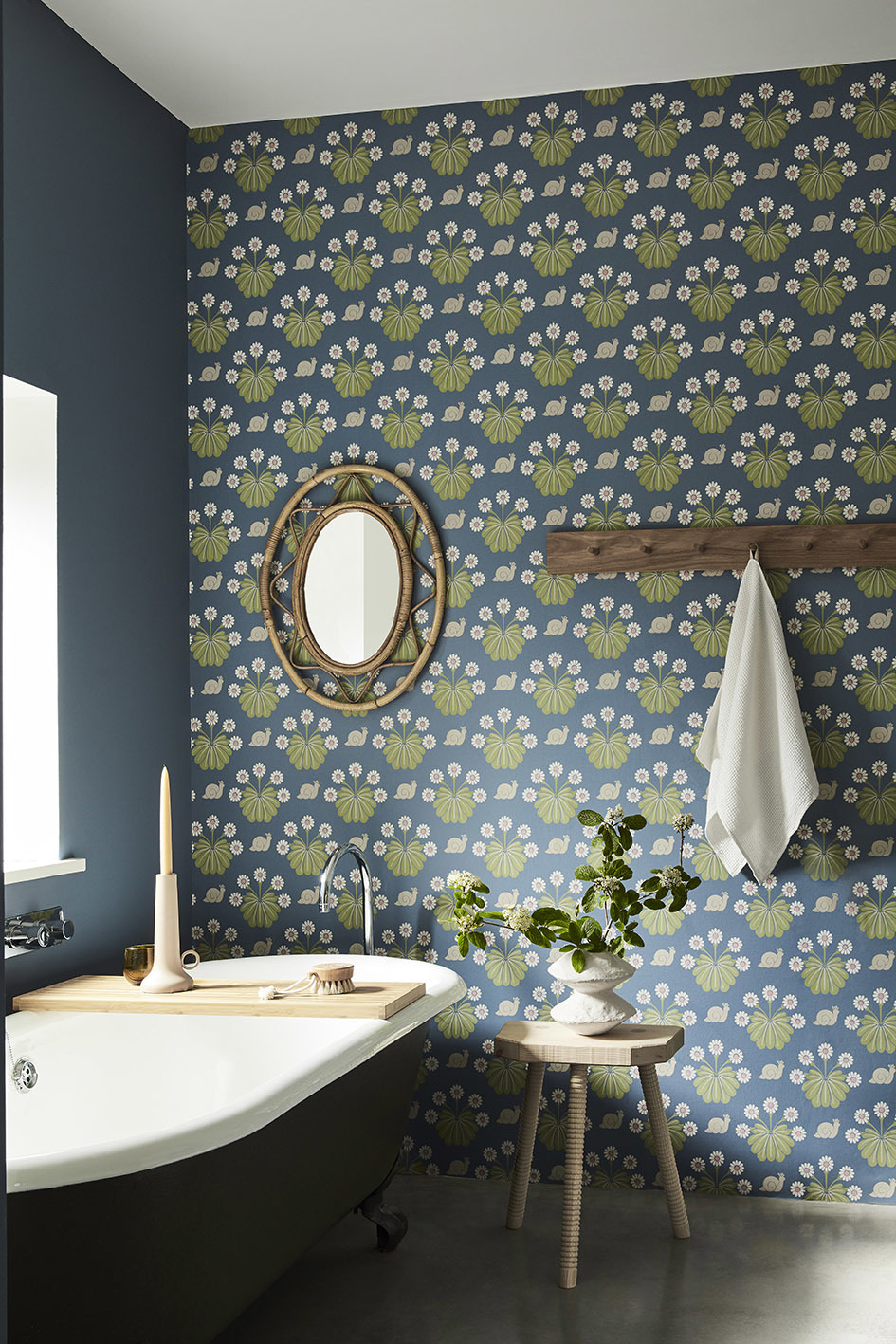 *Little Greene National Trust Papers II: 'Burges Snail – Juniper'
Featuring a beautiful floral design, 'Millifleur' – bottom left – has been inspired by a rather fascinating object, the Tournai tapestry at Montacute House in Somerset. An incredible 550 years old, it's the oldest surviving tapestry cared for by the National Trust. It depicts a knight against a background of tiny flowers. Hence the name, Millifleur, which literally means 'a thousand flowers'. Seen here in 'Garden' with three other colourways available.
Then we have 'Moy' on the right, a small-scale geometric design found at The Argory, near Moy in Northern Ireland. Not much is known about the original fragment, other than it's late 19th-century in origin and was printed in diluted watercolours. This paper comes in seven colourways with 'Pompei' featured here. 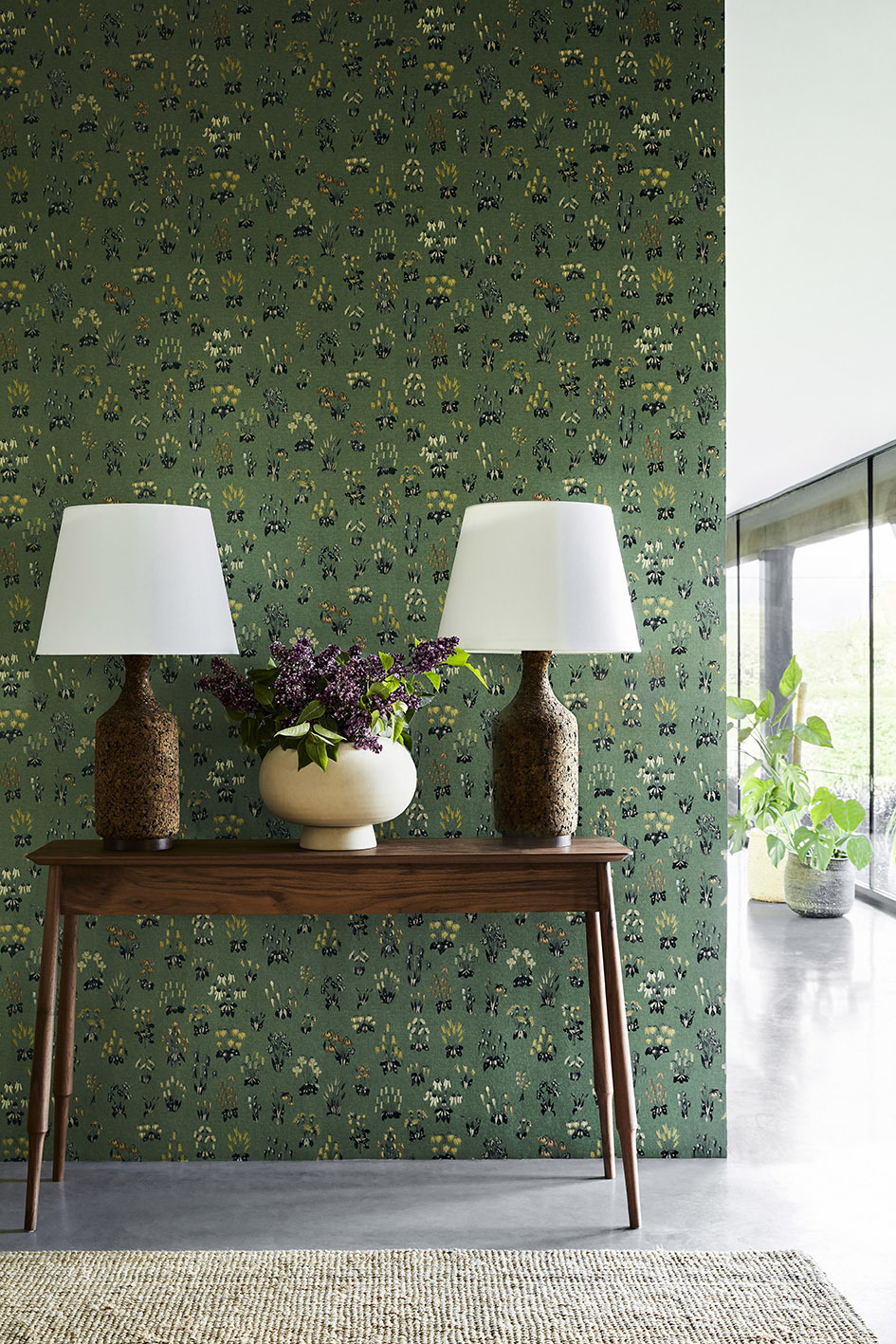 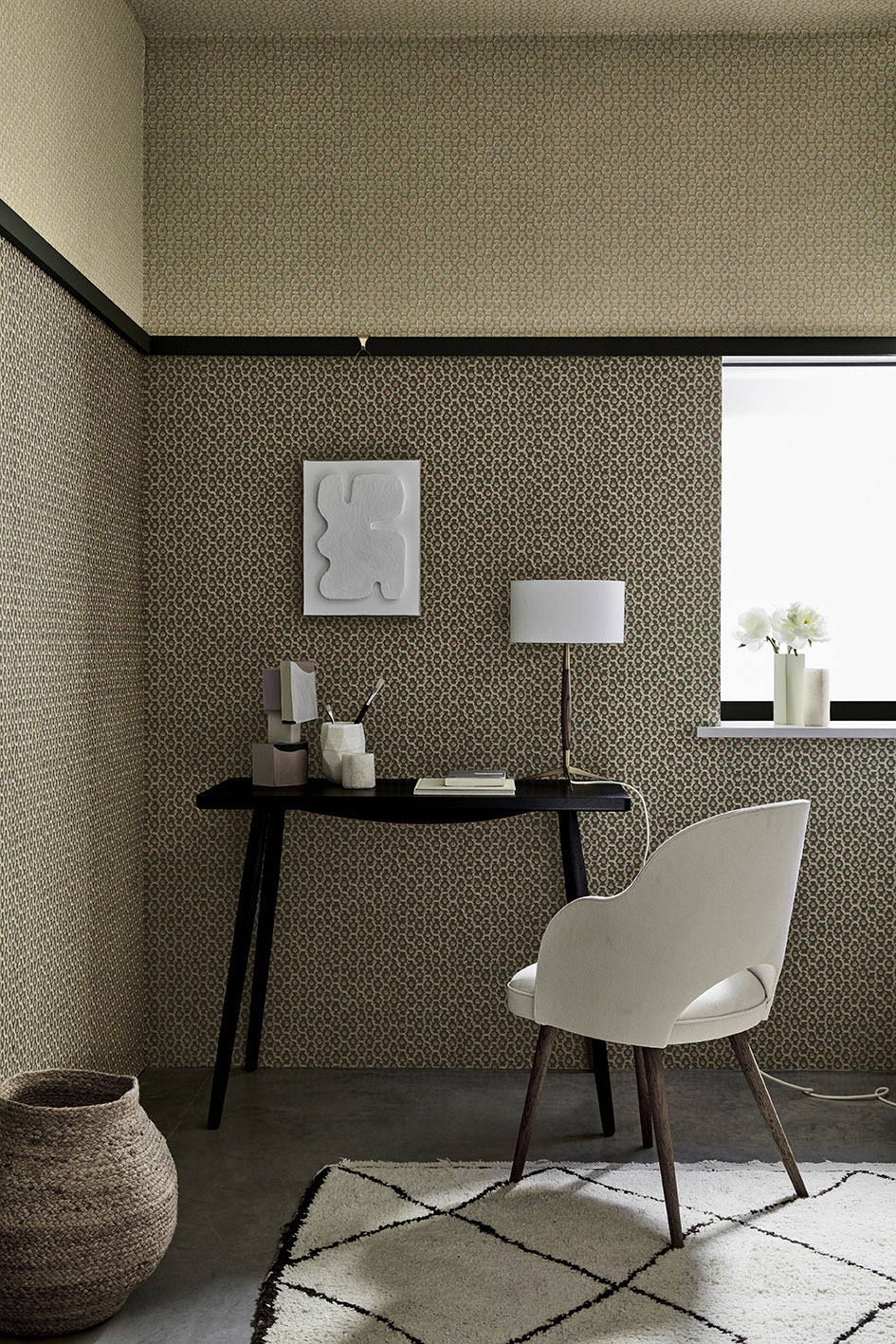 *Little Greene National Trust Papers II: 'Moy – Pompei'
The final offering in the National Trust Papers II collection is 'Mandalay'. With a captivating 'tree of life' design, Mandalay has been redrawn directly from the leather wallcoverings seen in the dining room at Bateman's in East Sussex. Leather hangings were among the first type of wallcovering decor – this example dates back to c.1712. Available in four colours, with 'Ceviche' shown here. 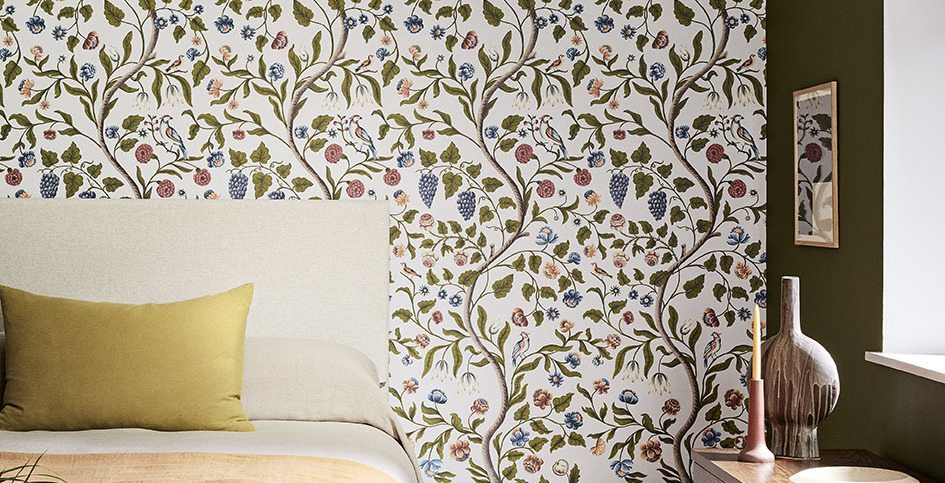 We hope you enjoyed reading about the inspiration behind these fabulous wallpaper designs. You can browse the entire collection via our wallpaper library in-store, or alternatively, check them out online. You may also be intrested in Little Greene's 'National Trust Papers' – the original collection. See it here, or get in touch for more details.
Like this article? Why not sign up to our e-newsletter (see footer) and receive an alert when new posts like this are published?
*Top banner image – Little Greene National Trust Papers II: 'Massingberd Blossom – Verditer'
Tagged as: Decorating, Little Greene, National Trust, Wallpapers
Share this post: