Posted on 27th May 2021 at 20:21
There are now several good quality, environmentally friendly paints available in the UK, which is great news for those of us looking for ways to make our homes greener. But not all of these paints are equal as far as eco-friendly credentials go. A paint manufacturer striving to offer a truly eco-friendly product must go beyond using natural ingredients and minimising harmful VOCs. They should also be concerned with how the entire production process affects the environment, including the management of waste products.

eicó is one such company that places the environment at the heart of its manufacturing operation. All eicó paints are made from 100% pure acrylics and therefore contain low or minimal VOCs (these are the nasty toxins that present an odour in traditional paints). As you may know, VOCs are problematic not just for the environment, but also for us humans too. They can cause a range of short-term and long-term health effects, including exacerbating allergies. Fortunately, eicó paints are MIT & CIT-free, which anyone with modern allergies would be grateful for. But aside from that, eicó is focused on reducing pollution to the environment, while increasing paint performance quality - so that regular repainting isn't required.
All eicó paints are made in Iceland and Sweden using 100% geothermal energy (heat from the subsurface of the earth), hydropower (water power technology), wind power and other non-fossil energy sources. eicó's Icelandic manufacturing facilities emits less gases than a 24-hour service station and are subject to Green Auditing which is certified by PricewaterhouseCoopers (PwC).

The paint produced by eicó is top quality and extremely durable. All finishes are washable - some up to 4,000 times, which is over four times the industry standard. And it's this incredible durability that makes eicó paints so economical. Take a look at this illustration below from an eicó case study. 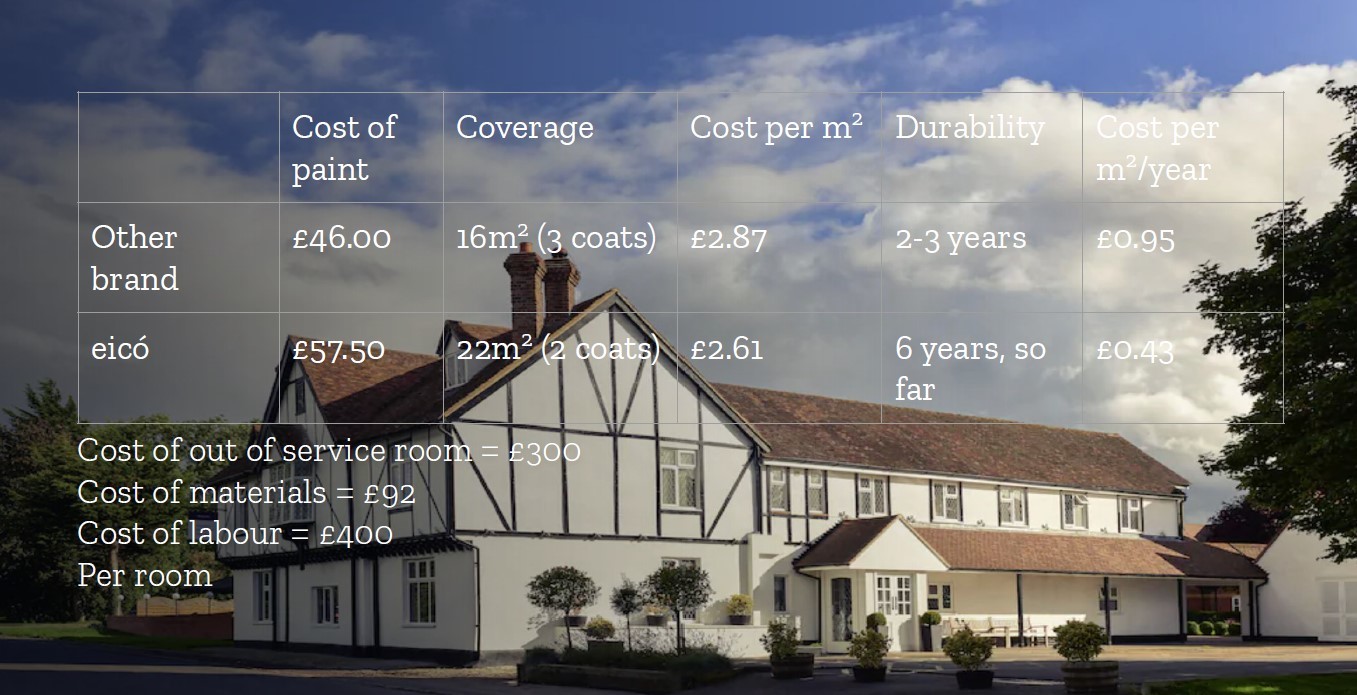 This relates to a hotel that was originally decorated using a paint brand that was 20% less expensive than eicó. The 'other brand' paint, though cheaper to buy per litre, only had a coverage of 16m2 and required three coats, making the cost of coverage per square metre £2.87.
That paint only lasted two and half years before repainting was required.
eicó was used to repaint the hotel. The coverage was 22m2 and only two coats were needed, making the cost of coverage per square metre £2.61. At the time of writing this article, the same paint remains in this hotel because there's simply no need for repainting.
And it's now been six years and counting!
When you consider the cost per square metre per year, eicó works out at effectively half the cost of the 'other brand' paint, because the durability is more than twice as good. At just £0.43, eicó offers one of the lowest costs per square metre of coverage, per year, in the UK paint industry. If that wasn't impressive enough, think about other direct and indirect costs involved with regular repainting. If you hire a decorating professional, you'll pay labour costs. In a commercial setting, decorating leads to downtime, which can be costly. In the case of this particular hotel, the cost of an out-of-service room is as much as £300. With eicó, downtime is minimal. You can turn around a room in just one day thanks to its quick recoating and drying time.
We think John Ruskin (an English art critic from the Victorian era) had the right idea about why it's usually unwise to go for the cheapest option. 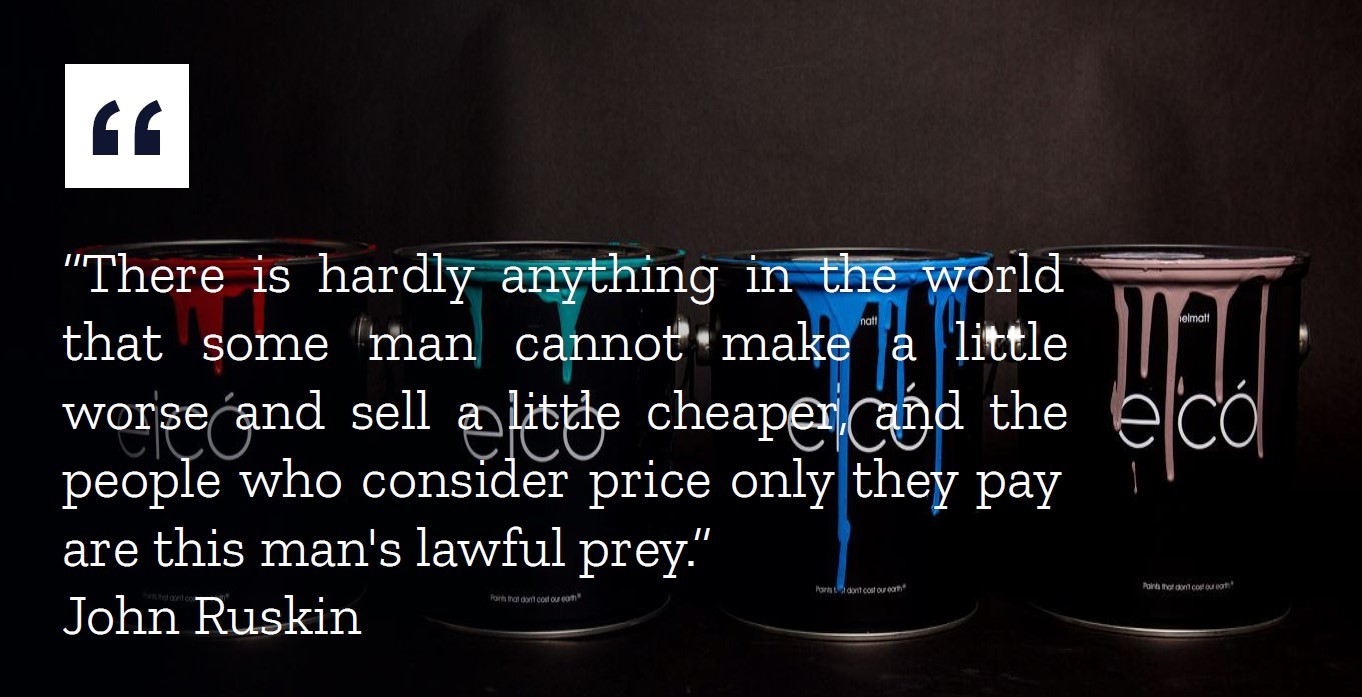 When you use eicó paints in your home, you can relax in the knowledge that you're:
Doing your bit for the environment - by using paints that aren't harmful to our planet;
You're protecting the health of you and your family - because eico paints don't contain dangerous toxins, and;
You're saving your future self some cash - because you can go longer (perhaps several years) between maintenance cycles.
Browse our eicó range online or pop into our Wetherby store.
Tagged as: Cost effective, Durability, eicó, Outdoor Paint, Paints
Share this post: